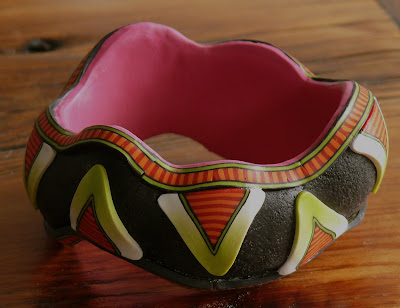 This is the bangle I made during the recent Donna Kato workshop in Denver. See my previous posting for more photos and details.

It's hard to tell the size of the bangle from the photo but when I put it on my wrist it's bigger and clunkier than something I would normally wear. Heck, I don't normally wear bangles at all but the design possibilities are intriguing so I'd like to pursue making more. I just want to refine future bangles to be a bit more wearable than the one I made here.

I consider this bangle to be a prototype example, because in trying to get as much done in the one-day workshop, we had to rush a bit to get through all the steps. So my application was sloppy in places, with edges not meeting up perfectly. But at least I know what to do now!

The canes used in this bangle are unquestionably Donna Kato style, those who know her work recognize the zipper cane and the use of stripes in the triangle "fang" cane against a the drama of a black background. I chose to follow her color scheme in the workshop as Donna suggested to save time in not having to do too much color mixing. Donna told us how she mixed these colors, but interestingly, despite the precision of her cane making, the way she told us to go about mixing colors was less precise: "a lot of this, less of that, and a dash of this."

What was cool about the red and orange in the zipper and fang cane is that up close the stripes are undoubtedly two different colors, but viewed from further away the red and orange merge and look rust colored, which is a color I love combined with lime green.

I also like the wavy shape of the base, I am not into perfection or symmetry so the free form shape is right up my alley. The zipper cane pulls it together though into a bit of order and it really makes a nice border, leaving the door open for interpretation inside those borders.
Posted by Caren at 9:17 AM