This morning, without warning, I decided to blog about my mold making history. So here is a very brief retrospective:

I've loved making things out of molds since I was a kid...I used to have a Creepy Crawler set in the 1960s, I was fascinated by being able to pour "goop" into a mold, heat it and come out with a rubbery bug. After that childhood introduction, I never used any more molds until I was an adult, but you could say the die was cast. 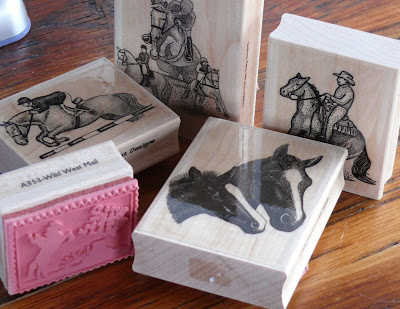 A few of the hundreds of horse rubber stamp designs I made in the 1990s
In 1989, I started my own rubber stamp business called True West Designs. I had molds made from my own original artwork (I never used clipart), then pressed sheets of uncured rubber into a vulcanizer to create each rubber stamp. I did very well with my stamp business, having started it just a couple years before the stamping craze hit. I did all the production myself, and during the peak mid-1990s I used to get wholesale orders for hundreds of stamps at a time. I was extremely busy and made some good money for a lot of years.

In the mid 1990s, I started sculpting horses and making my own plaster molds for slip casting. In 1996, I spent a day with Joan Berkwitz of Pour Horse Pottery in Carlsbad, California, and Joan kindly shared a lot of mold making tips with me. 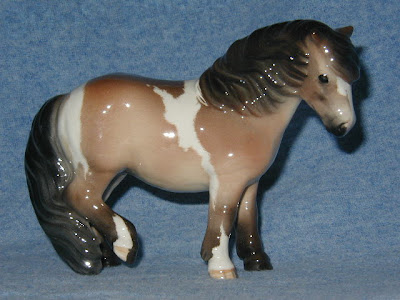 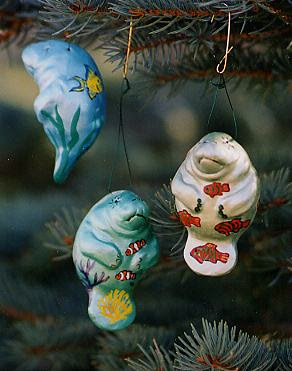 Manatee ornaments I made in 2001

I started beading in 2000, and that evolved into making my own ceramic beads. I sculpted originals and made two piece plaster molds for slip casting. It was a much simpler process than the more complicated model horse molds, but still labor intensive. 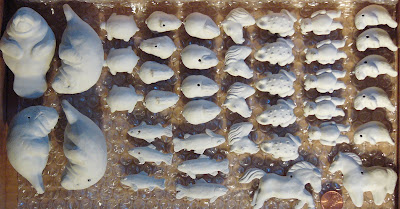 Manatee ornaments and beads in progress, in the greenware state after slip casting in 2003. Shown are fish, frogs, horses, turtles, etc.

Back in my ceramic days, it was hard to imagine ever giving up earthen clay for polymer clay. But that is what happened, as I have found the imitative techniques and ease of polymer mold making and casting to be very appealing. I can work out my ideas with less time from conception to realization. I used to have to cast many ceramic pieces to fill the kiln before firing, and the lag time was really frustrating, not to mention the less than great results I'd often get.

So here I am at my current state of evolution. I made these beads this week out of polymer using the imitative ivory technique: 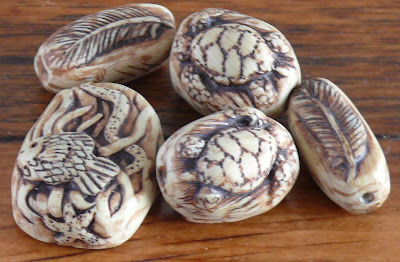 Imitative ivory press molded beads-2008
Posted by Caren at 7:51 AM

The imitative ivory is pretty incredible!

I saw that you took one of Dayle Doroshow's classes. I guess she is teaching soon in France, and I can't imagine how fun that would be. Dayle is great. I met her when she came to my work. She's so creative!

Thanks for the great blog! I love looking at your work!

I'm so glad I followed your link in PCPeople about color recipes.

I love your pc work, share your feelings about horses, nature, inspiration, coating vs. buffing clay, and much more, I'm sure.

Your hipshot pony is wonderful, and the manatee's definitely have the Aww factor. They make me smile.

Thanks for sharing. ...Harriet

I've enjoyed your blog and loved following your evolution as an artist. I am only sorry that I came upon your rubber stamps too late to have obtained them. I love horses and grew up around Saratoga. I have so many pictures of life at the track, in the stables, in the paddock area, etc and cannot find your stamps to enhance my scrapbooks. I will keep searching as I surf the net.

where was the pouring hole in your Manatee ornaments ? did you fill it up ?