A Look Back: Street Sense Beads 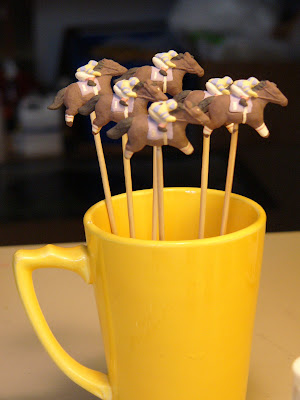 This time last year, I was making 25 ceramic beads in anticipation of the Kentucky Derby. To make a long story short, I used to be in the Thoroughbred racing business and remain friends with Carl Nafzger, who trained Kentucky Derby winners Unbridled (1990) and Street Sense (2007). My husband and I were attending last year's Derby and I worked all winter to create these beads for the close associates of Street Sense. I was confident he was going to win the Derby and wanted everyone to have a memento. (I blogged extensively with lots of photos on livejournal.com about the Street Sense journey, starting with his win in the 2006 Breeders Cup Juvenile and on through Derby week, the Derby, and the Preakness.)

I worked really hard on these beads. I sculpted the original out of plasteline clay, then made a plaster mold for slip casting. After casting them in clay slip one at a time, I cleaned up the mold seam lines, painted them with underglaze in the dark brown color of Street Sense and the blue and yellow jockey's colors of Street Sense's owner. The top photo shows a few of the beads in progress, they have been underglazed and were waiting to be fired, then fired again with the clear glaze. 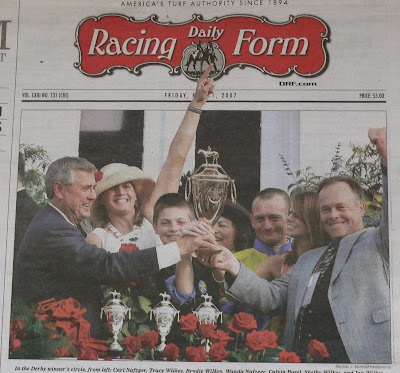 The good news is, of course, that Street Sense won the Derby and many of us were in the hallowed ground of the Kentucky Derby winner's circle wearing the bead necklaces I made. In the above photo of the cover of the Daily Racing Form, the woman in the white dress and hat with her hand raised is wearing my bead necklace while in the Derby winner's circle. If you click to enlarge the photo you can probably see it better.
Posted by Caren at 8:42 AM

Labels: a look back