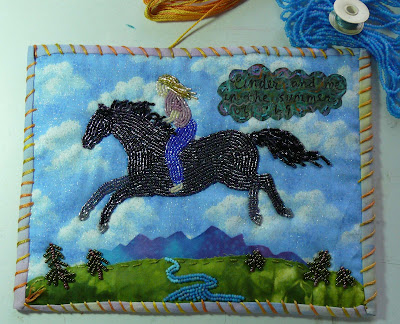 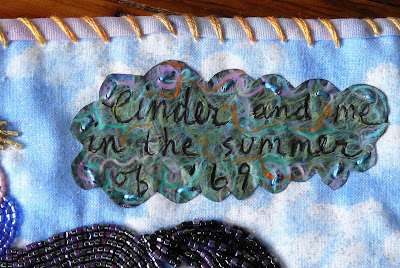 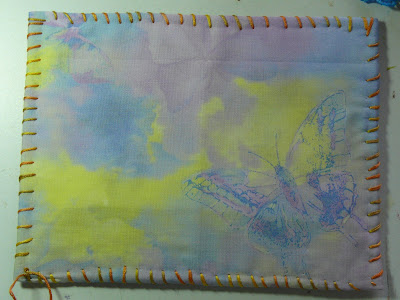 Continuing on with my "Inspired By Horses" theme, for July's page I step back in time to 1969.

I was twelve that year, and had been horse crazy since birth. My sister and I campaigned our parents for years to buy us a horse, and finally in April, 1969, we got a horse named Bobby. My sister and I took turns riding Bobby, and then my parents realized that it might be wise to get a second horse. In July, we bought a pony. She was black as coal, and I named her Cinder. Cinder became mine alone, and we fit together like a glove. 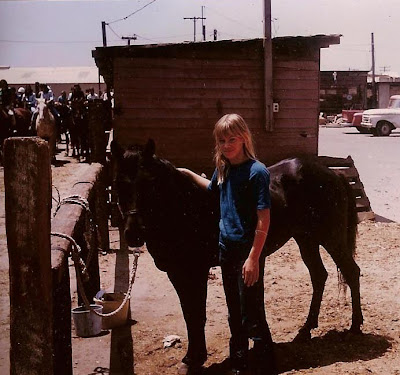 me and Cinder in the summer of 1969 at Flying W Stables in Paramount, California

We were told Cinder was originally from Wyoming, although I was never able to confirm that. But as a kid born and raised in the Los Angeles area, Wyoming was the wide open spaces where cowboys roamed the prairies....far away from the concrete riverbeds and railroad tracks where I rode horses with my friends.

I rode Cinder for years in local gymkhanas, (barrel racing, pole bending, and other events) we won lots of ribbons and trophies despite the fact she was much smaller than the other horses we competed against. She was fast and agile, and I thought she was the best horse on earth.

I owned Cinder until I graduated from high school, when I sold her to another girl who loved Cinder almost as much as I did. Eventually Cinder was sold to someone else, and I lost track of her at that point. If I had to do it over again of course, I would have kept her forever.

This is not the first time I have created this image. Many times over the years I have done drawings and paintings of a barefoot girl on a horse flying through the air, with no saddle, no bridle. It's all about freedom and the carefree days of youth, it's a very personal theme for me and as close as I ever come to doing a self portrait.
Posted by Caren at 2:29 PM

Your page is wonderful! Your feeling of freedom and carefree youth is amazingly conveyed. -Karen

Thank you for allowing us to share a wonderful moment in your life. Your page brough a huge grin to my face as I remembered one of our younger daughters doing much the same thing.

This is really fun and well done---I really like this page---are you doing all 12 months with a horse theme? what a great idea!

This is such a wonderful and a little bit wistful page. I never had a horse or pony, but in my imagination, I was flying through the air on one of my very own, too. I think you captued that feeling perfectly.

I love your theme and the way the pages are manifesting.

You really do horses in beads very nicely. Oh, the beloved pets of childhood. Can't wait to see what horsey thing you do for August!

What a lovely tribute to you and Cinder. I love how you two are flying over the earth - so happy and free!

I think they are one of the most handsome animals on the planet, you do them honor with your beads - simply beautiful work!

This page just makes my heart happy, what a great way to share your memory.

I love you page and your stories. Your page illustrates so well your love of Cinder and the places that you would go even now if he were in your possession. As it is he is in my memory possession and you are reliving your story and sharing it with all of us. Thank you for this gift.

Thank you Caren for sharing your story behind your art, very precious! I love the way you painted your background to accentuate the focal point of you and Cinder :o) Lillian in WA

Ditto everyone else's comments, plus my compliments on your finishing techniques. The way you bound the edges, the fabric on the back with the stamped butterfly, is so totally right for the piece... celebrating innocence, childhood dreams, and the love we feel for our animals/pets. Bravo!